This morning our many friends lined the roadside to greet us as we went: the graceful, ponderous giraffe, the bruise-flanked topi, the lithe impala and the squat warthog. There were elephants on our way too, including a tiny youngster: mtoto watemba. We greeted them all but our minds were set on one thing.

We saw them first, the wildebeest and zebras, in a great stripe across the horizon. We approached and saw them now as individuals, thousands upon uncountable thousands of round-haunched zebras and thin-shanked wildebeest, milling in untidy lines over the plain. The wildebeest were all but all males, here ahead of the pregnant females who wait to the north for more rain to fall before coming to drop their calves. Just one fresh-born calf was among the many thousands we passed, the afterbirth still dangling from its mother. With the zebras, equal in number with the wildebeest, were many foals of all ages, their stripes a rich brown, shining in the morning sun.

Over these tens of thousands of migrants were migrants of another kind. Hundreds of white storks from Europe, many hundreds more of cattle egrets, drifting over the herds in waves. Vultures - Ruepell's, lappet-faced, hooded and white-headed - swayed through the sky and all around the wildebeest were great flocks of wattled starlings.

This was the timeless, rain-following pilgrimage we had come to see. 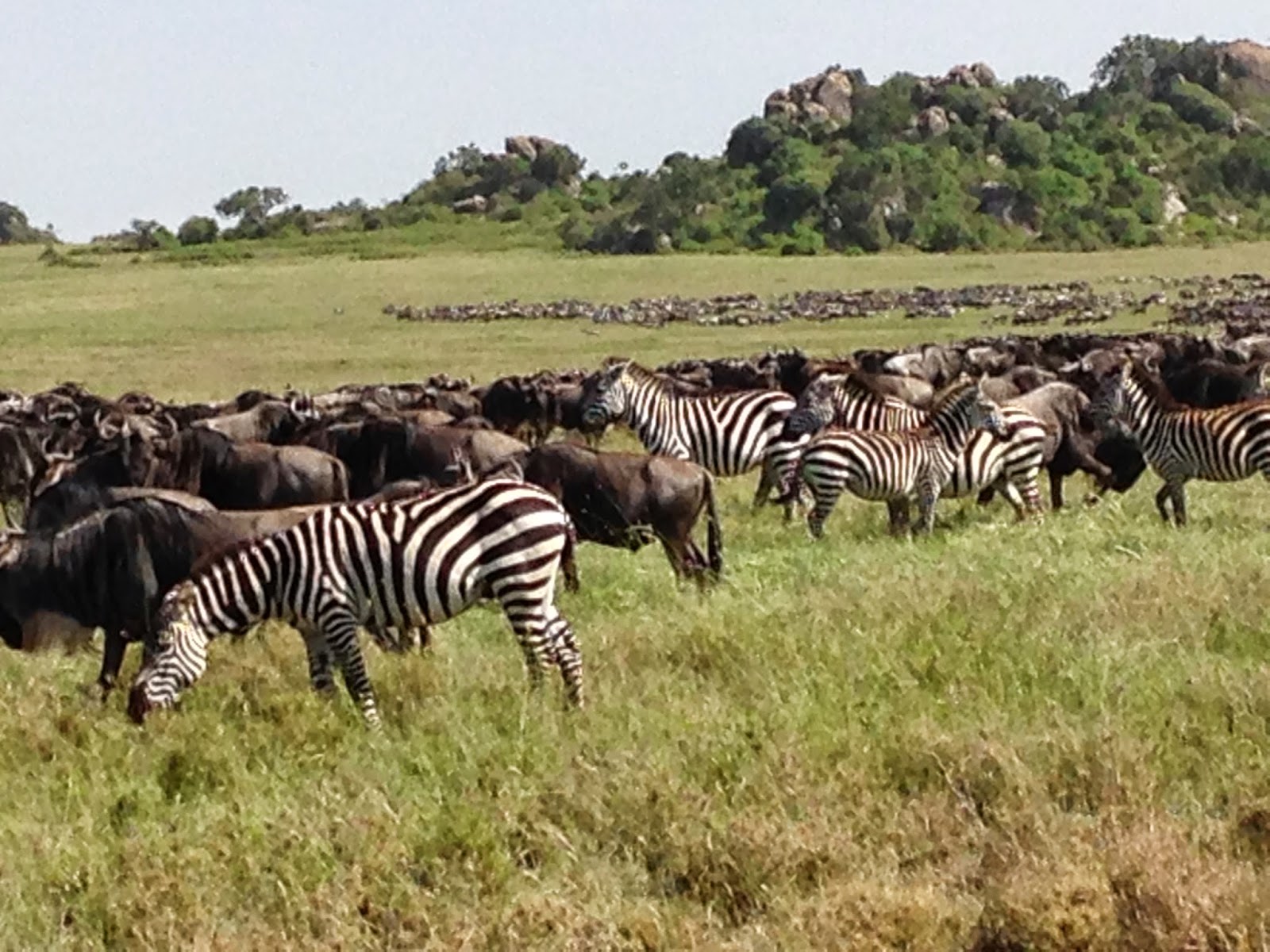 We turned home in the afternoon through the Seronera valley, where hippos lay fat in the water and all about them trotted ruff, little stint, black crake and three-banded plover. Giraffes fed here on well-watered acacias and marabous sulked in the tops of the trees.

With excitement I saw three jeeps gathered by an acacia ahead. To the left of them on a ridge a few buffalo could be seen but the jeeps' attention, and ours too, was focused on the patch of shade cast by the flat-crowned old tree. Here were lionesses and their cubs in a hot heap; these handsome, magnificent animals whiling by the day in half-feigned sleep.

Further left though, the top of a gold head could be seen in the breeze-rippled grass; a lioness' head staring intently at the buffalo on the slope's crest. She crawled forward, her muscled back cutting through the waves of grass. Another head appeared behind her, equally fixed on the buffalo. The first lioness dropped and the second replaced her, inching forward, intent on life-giving death.

The forward lioness broke into a run; her sisters under the tree stood to watch, and one by one they peeled from the pride to hem in their prey. But the the buffalo crashed over the ridge in panic, far more of them, by the dusty drumming of their feet, than we had seen. The lionesses had failed and as they returned to their well-grown cubs under the tree we saw, despite their muscular magnificence, how thin they were. They had not eaten in days.

The buffalo, dozens of them, emboldened by the lioness' retreat, and wishing to press home their advantage, blundered back down the hill towards the pride, a boss-headed bull in their lead. Too many tons of flesh bore down on the lions, who fled from their stand and crossed the road among the few jeeps gathered at this drama. Eighteen of them: seven lionesses and eleven cubs, thin but well-grown, of more than six months' age. 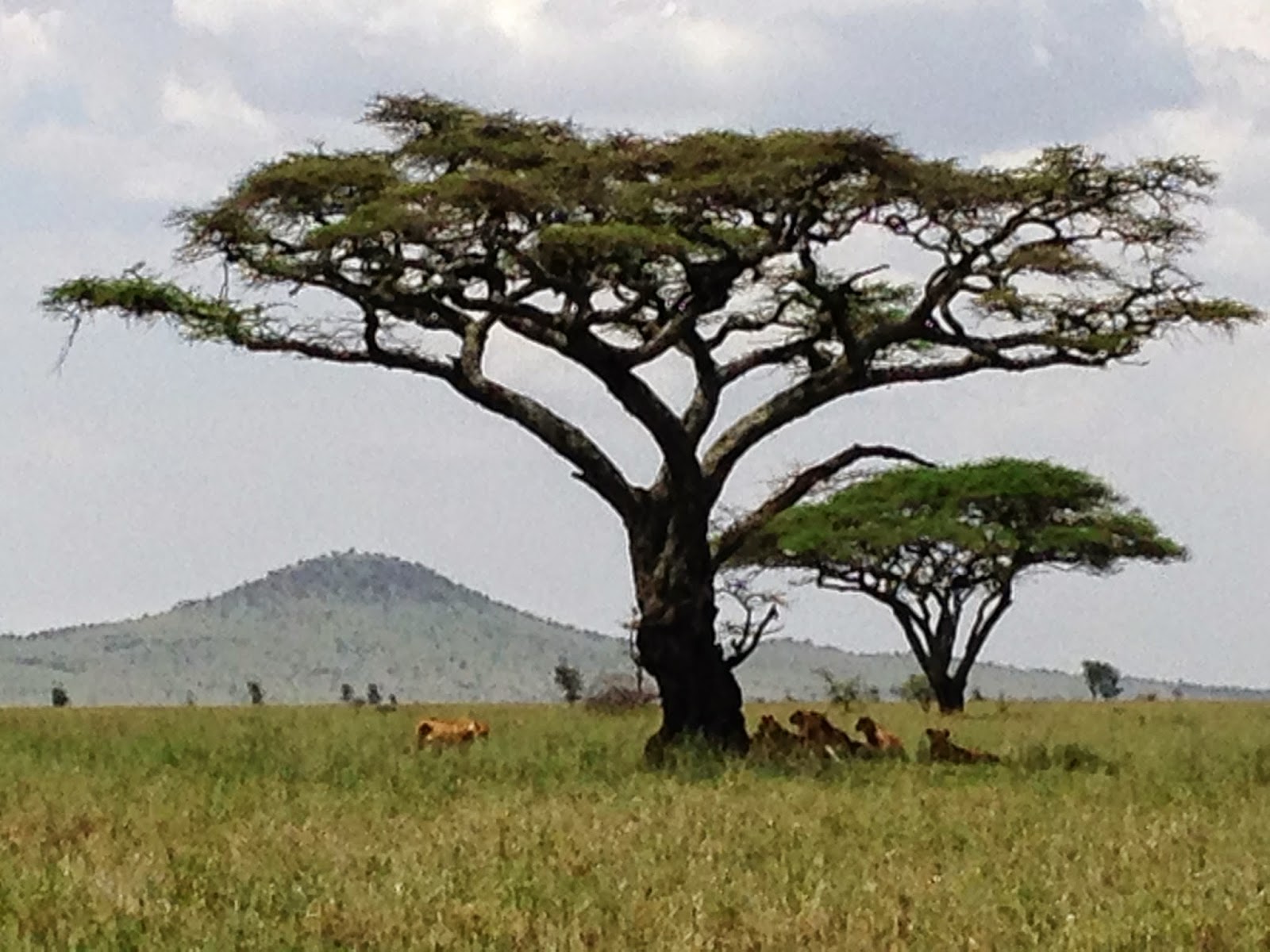 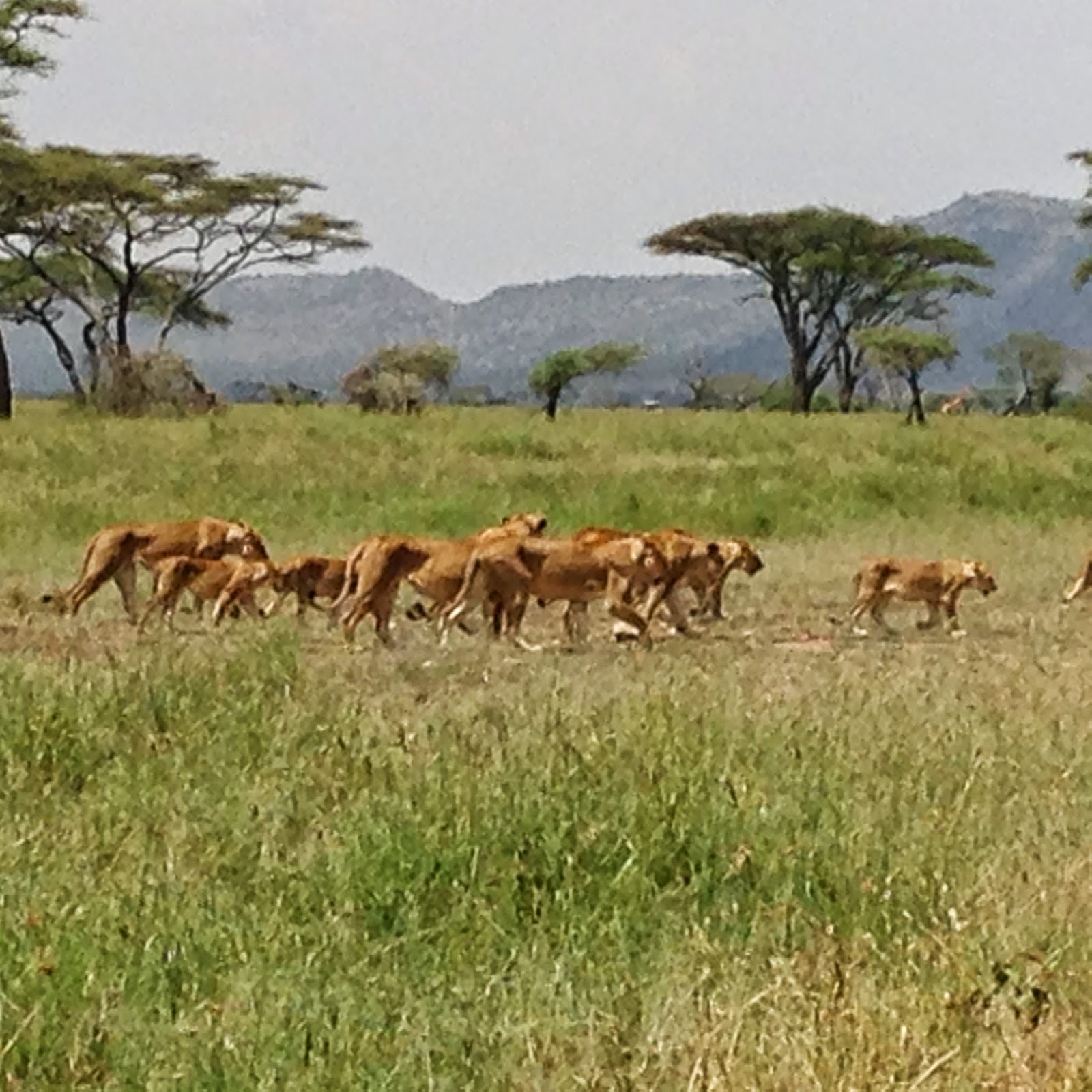 They slipped into the channel of the river, and out of view, these lions. Today the buffalo had won this skirmish in the eternal battle between predator and prey. We drove on, our jeep full of excited talk of cats. The sky, as we crossed the short-grass plain, turned saturnine, and the cool damp air spoke of rain. With my mind in India, and several such heavy afternoons on which I had seen jungle cats, I turned to my group and said, 'I feel a serval coming on.'

Minutes later Richard pulls to a stop and by the right side of the road sits a ramrod cat with gemstone eyes and absurdly big ears. Its legs are neatly striped, as though swiped with a blackened brush. The serval stands and walks beside us, then slips into the wispy grass on neat, deliberate feet, its ears twitching for a mouse's squeak and a meal.

We drive back through the rain, past Hartlaub's bustards and trees decked in lesser kestrels. Miles to the north the news of this rain will reach the nostrils of the wildebeest and perhaps it will bring them here. Some of them in their death will bring fortune to our hungry lions.

Posted by Compare the Marsh Tit at 19:16