Since my return from Bolivia five years ago, the most fulfilling, meaningful project on which I've worked has been Discovery Quest. This is a programme for people with severe mental health problems, which was conceived by Paul Lefever, and which has its logistical home at Julian Support. Its aim is for participants, many of whose lives are severely disrupted by their conditions, to grow in physical and mental health through a series of walks in the outdoors. I have been privileged to be involved since the start of Discovery Quest's first round of funding, as a nature enthusiast, birdsong-identifier, weed-spotter and co-walker. It has been a wonderful, rewarding experience.

A couple of years ago, in a hide at NWT Holme Dunes, Paul asked me whether I would take on a much bigger project: the writing and delivery of a course on Norfolk's wildlife and wild landscapes for Discovery Quest participants. I leapt at the chance and the result, supported by David North at Norfolk Wildlife Trust and many others, and sensitively designed by Paul Westley, was the Discovery Quest Wildlife Workbook. Of the many things I have written about wildlife in many places in the world it is the single thing of which I am proud.


Recently Paul Lefever called to say that Discovery Quest had received a second round of funding, for a new programme with the workbook at its heart, through which people will have the opportunity to explore Norfolk's wild places and take part in simple creative activities in response to them. My role in the new project is to help my DQ colleagues, Bethan and Katie, as they prepare to deliver the workbook to participants.

Today, under a grey sky, with a promise of rain, we met on Holt Lowes to talk heaths. The Lowes have long been one of my favourite spots for watching Norfolk's wildlife. Here a family of NWT's Dartmoor ponies helps preserve the heath's flora and fauna by grazing, in exactly the way in which livestock has unwittingly managed heaths through centuries. Here were the ghastly red strings of dodder, sucking the life from gorse, and the feathery fronds of wood horsetail in shady corners. Here too were common spotted orchids, greater bird's-foot trefoil, heath bedstraw, ragged robin and round-leaved sundew in flower. A female keeled skimmer brushed her brittle wings through the gorse, a woodlark sang his tragic plaint in the clouds, and it was good to be sharing this beautiful heath with Katie and Beth.

From here we moved to Kelling Heath where silver-studded blues sprited through waves of purple moor grass and large skippers pinged around the blooms of brambles. Common blue damselflies sat in the sun, common green grasshoppers sang their sewing-machiney songs (a month late but after the summer we've had who can blame them?), and the tiny tissue-paper flowers of heath milkwort lined the dusty edges of the track.

On a verge nearby, where every year at this time I pay homage to the one maiden pink I know in North Norfolk, a single flower shone. Peru was spectacular but it's lovely to be back where I belong. 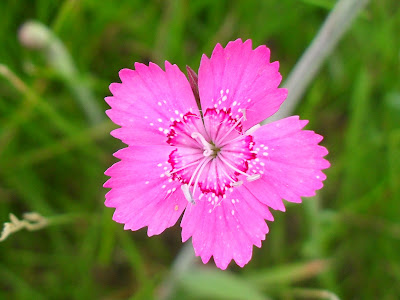 Maiden pink by Bethan Wardale
Posted by Compare the Marsh Tit at 21:45